Much like the transition from Winter to Spring, things are progressing here in an almost imperceptibly slow manner.
Hitty Jean continues to enjoy her work at the Book Shop and is always happy to help her friends pick out a new treasure to take home (or to gift!)  A few new books are added to the shelves most weeks, and slowly they are sold on to be enjoyed by Hitty friends:

Hitty Sparrow is one of her best customers: 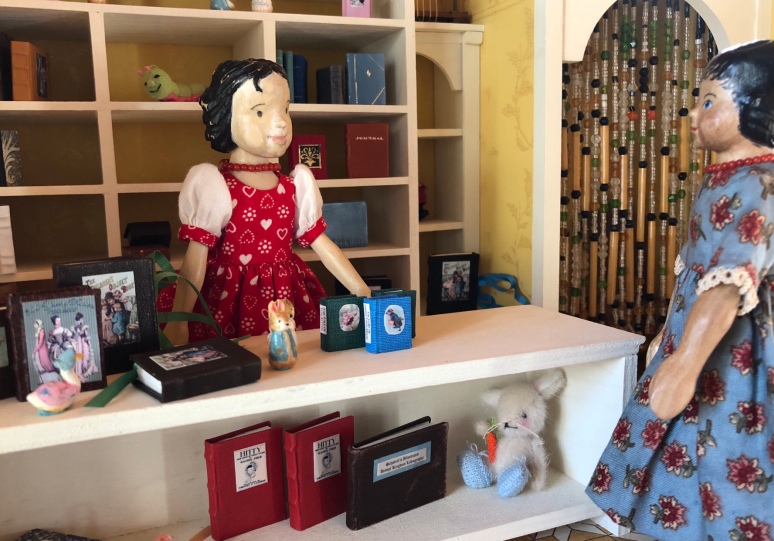 Bécassine can most often be found in the kitchen, helping the littles to hone their baking skills – “Of course, ma petite, you can finish frosting the cake!”

Great Aunt Doll is delighted with her new chairs…like waiting for Spring bulbs to bloom, she “planted” the idea for them last Fall, and now they are here! 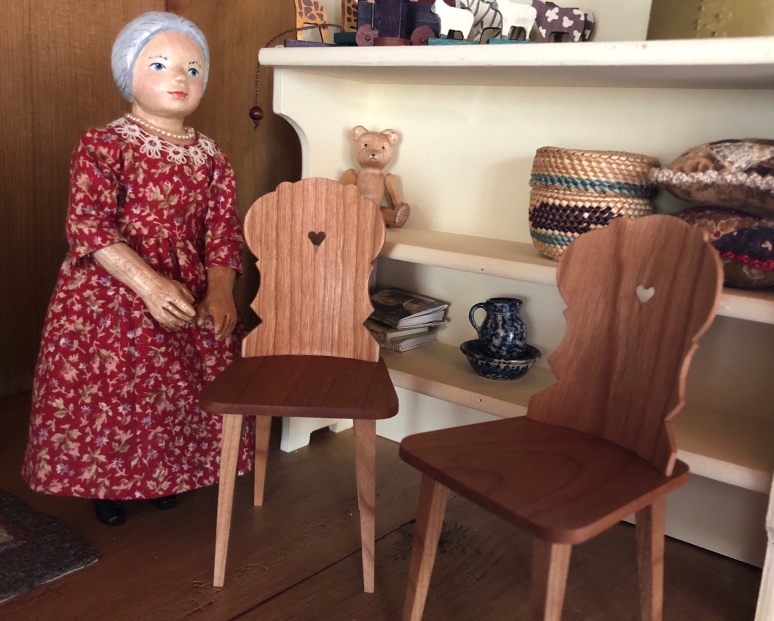 Every Day the Same ~ Every Day Different

CHAIRS will be for sale in the Hitty Shop again on Friday so if you missed them last time, more are coming…
There are still a few Beatrix Potter books left, as well as a couple Children’s Object Books (one of my favorites!)

Click HERE to visit our shop on Etsy ❤️

There is nothing like a bunch of fresh flowers to cheer up a grey midwinter’s day: 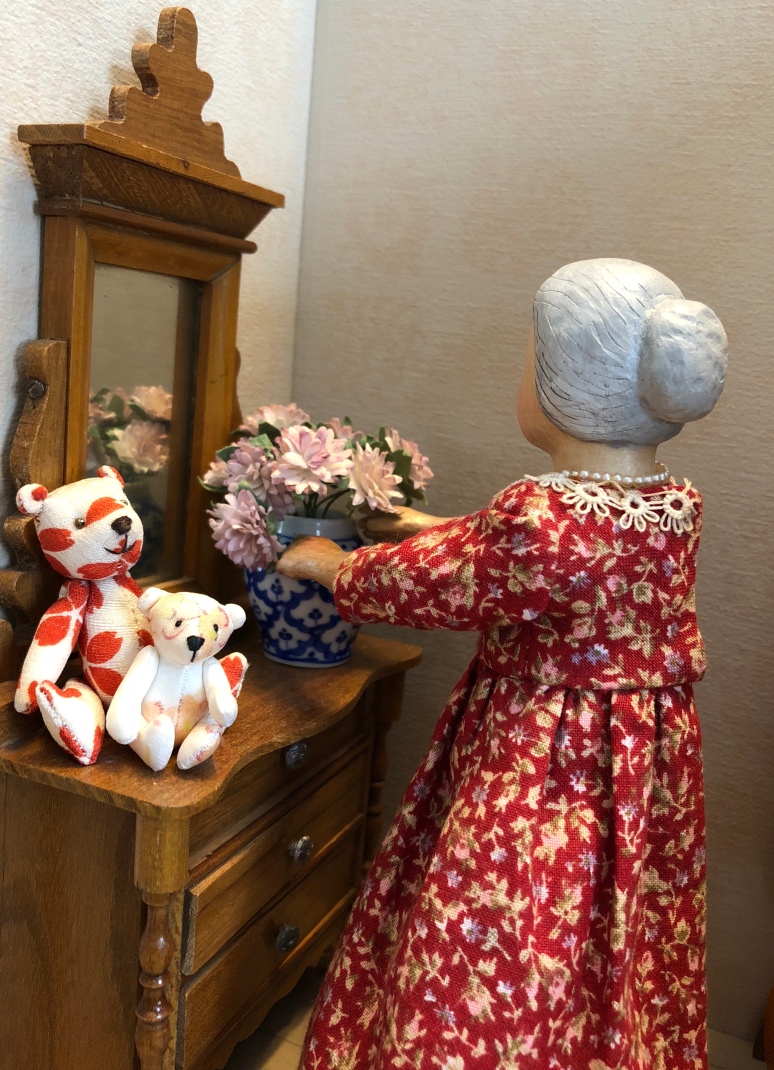 Great Aunt Doll is sorting through her Valentines.  She has many far away friends she would like to send a card to and she wants to be sure they make it on time:

A while later, little Tadie comes up to Great Aunt Doll with a *look* in her eyes.  She has seen the Valentines on Great Aunt Doll’s desk and she would like to send some also:

Of course Aunt Doll is happy to set her up with some Valentines of her very own!  Little Tadie takes a lot of time choosing just the right cards to send.  Valentines are very serious business: 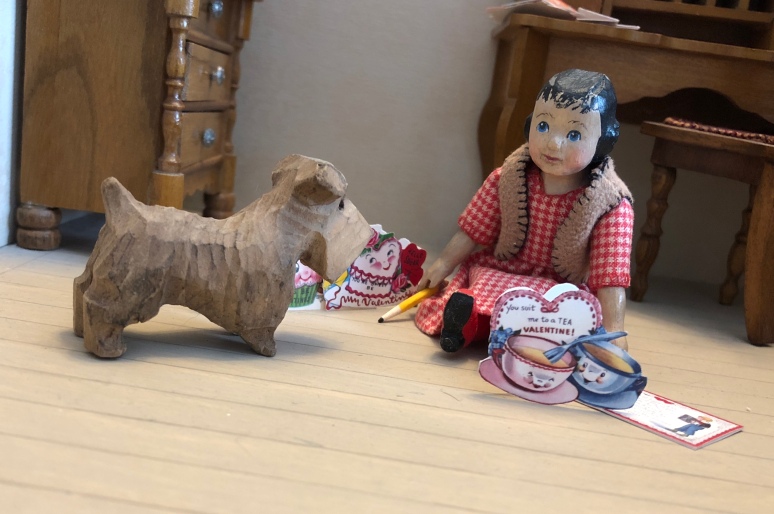 When Tadie finishes, she asks Great Aunt Doll to read her a book about Raggedy Ann.  “She has a candy heart!  Like a Valentine!”  Great Aunt Doll is always happy to read stories to little ones, and a story about a doll is her favorite kind! 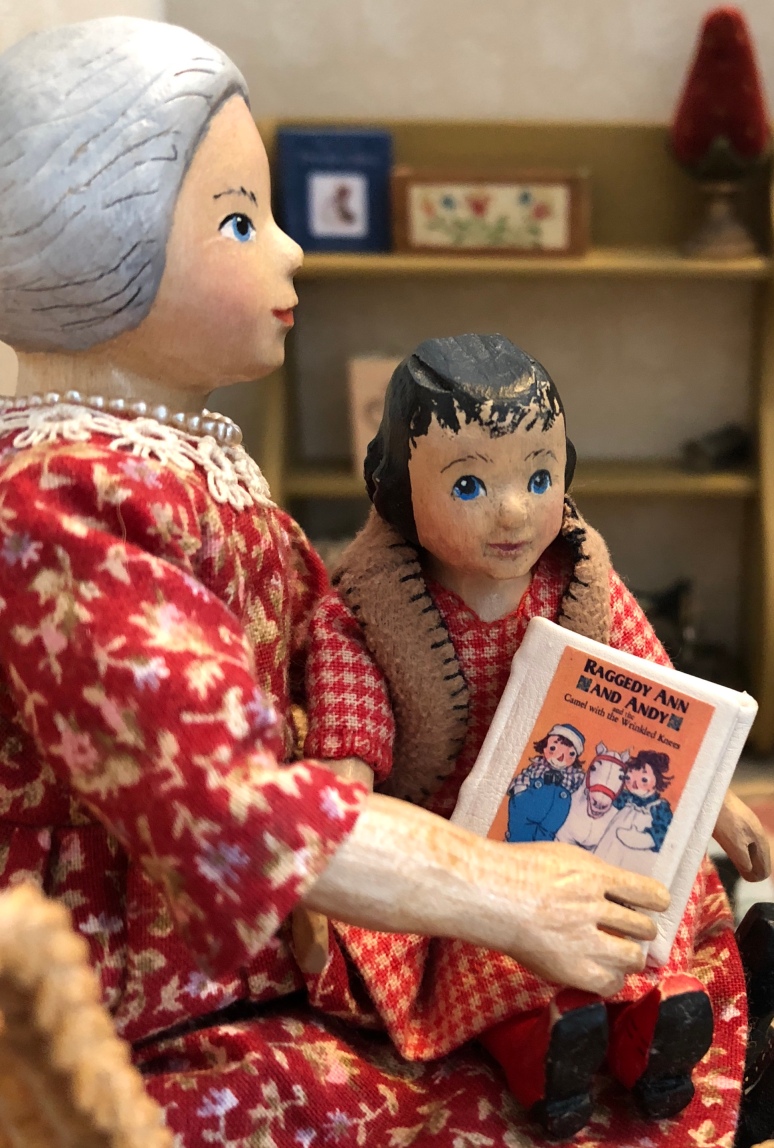 P.S.- Great Aunt Doll found her Valentines here.  They are beautifully printed and can be ordered in 1:12 or 1:6 scale.  (Ours are 1:6)  We just thought you might like to know…we aren’t being paid to advertise or anything like that…

P.P.S.- New books are up for sale in our Etsy Shop.  (Including Raggedy Ann!)  Click here to see what’s available.  ❤️

Great Aunt Doll and Hitty Jean are trying to clean up the Holiday Aftermath.  Hitty Jean thinks it is time to take down the Christmas tree, though it is so lovely, she thinks it a bit of a pity.  Great Aunt Doll can’t believe the mess.  Paper everywhere, stockings and new toys strewn about…and it seems the littles have gotten into the tin of Quality Street candies.  Sigh…So very much to do!

Hitty Kalyna is asked to help with changing the beds.  But what Hitty Kalyna *really* wants is new bedding.  “Please?” Great Aunt Doll considers this request as she sends Kalyna off to the linen closet.  Perhaps sometime soon, but new bedding isn’t in today’s plan:

Great Aunt Doll goes to her sitting room, thinking she will find some Peace and Quiet there.  What she finds is the setup for a concert the Hittys are planning.  They have gone off to find some maracas.  Great Aunt Doll thinks she will let them practice a little bit longer:

Finally!  Bécassine is in the kitchen, preparing coffee.  She pours one for Great Aunt Doll as well and they add just a *bit* of Baileys for good measure.  Great Aunt Doll considers which of the Quality Streets is her favorite.  The two friends share a moment of Peace and Quiet in the kitchen, reflecting on family, togetherness, and their hopes for the New Year: 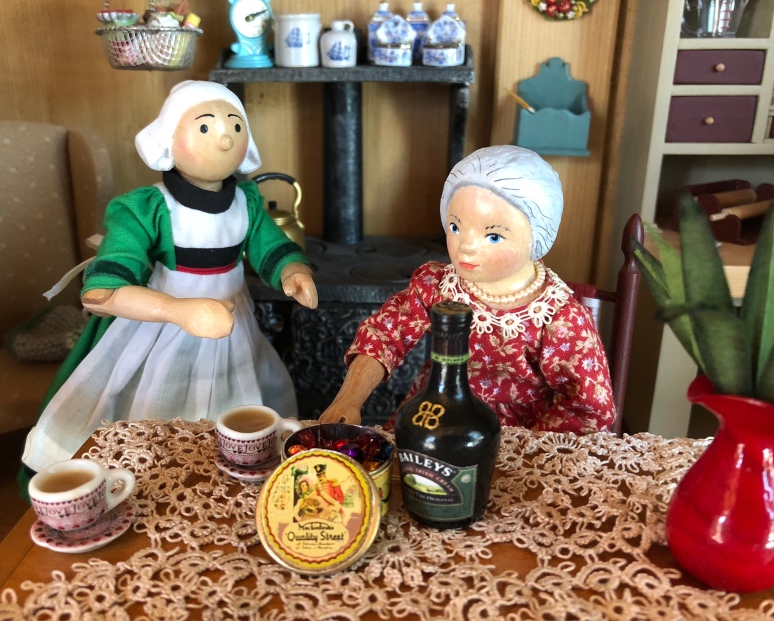 Happy New Year to our Hitty Friends!  We wish you all the best in 2018!

Hitty Kalyna is working at the Book Shop today.  A mailbox, especially for Santa, has mysteriously appeared on the counter!!!

Hitty March can’t wait to tell Hitty Sparrow about this new development!!  They decide then and there to get busy with their Christmas letters!!! 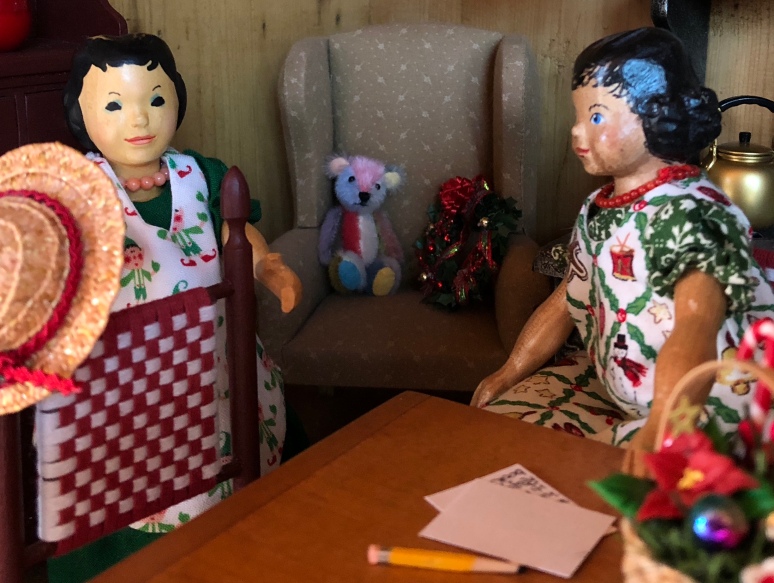 Hitty Kalyna isn’t the only one working today…Hitty Jean has been at the Christmas Market Stand selling festive wares:

So much to choose from!  Does your Hitty need a book?  We have plenty still for sale at our Etsy shop.  (A few new Raggedy Ann books will be added soon, when Hitty Jean has some time off from the Market Stand…)

In other news….Ellen & Pink have had a special “Guest” in their episodes the past two weeks!  Imagine Hitty Jean’s delight to see one of her books as the star!  Click HERE to see!

We love this joyful, festive and sentimental time of year!

The Hittys always meet some fun towel friends on the ship! *Froggy* was a favorite this time around.  He was kind enough to let them sit on his back so they could see the ocean:

No matter what time of day…always beautiful: 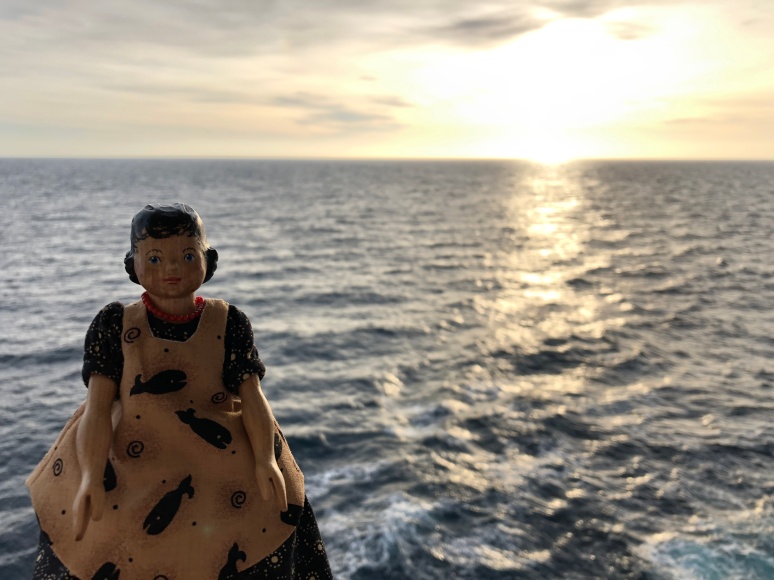 A special rainbow at sea: 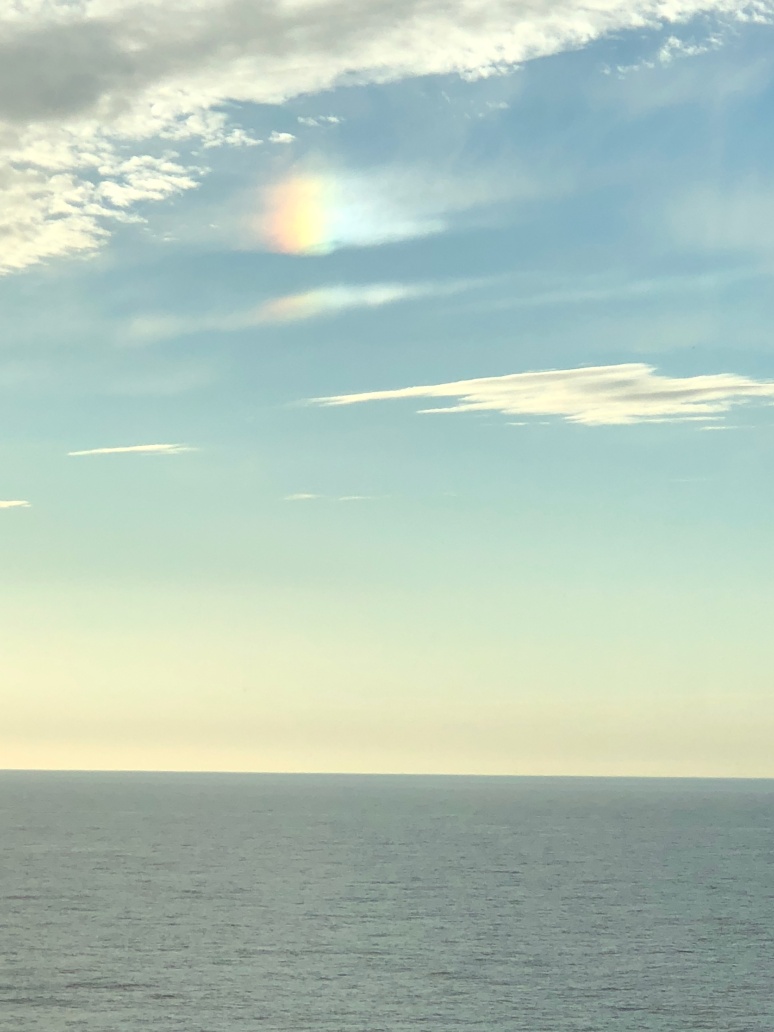 In the wee hours of Friday morning, the Hittys were able to see the ship sail back into Boston Harbor.  It was a twinkly sight, just before sunrise:

The ship had docked by the time the sun came up – “Good Morning, Boston!” 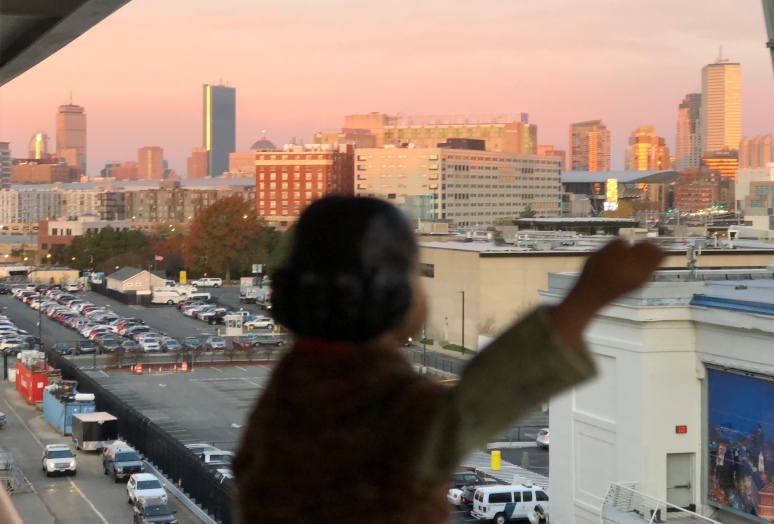 A last cup of tea was enjoyed on the balcony: 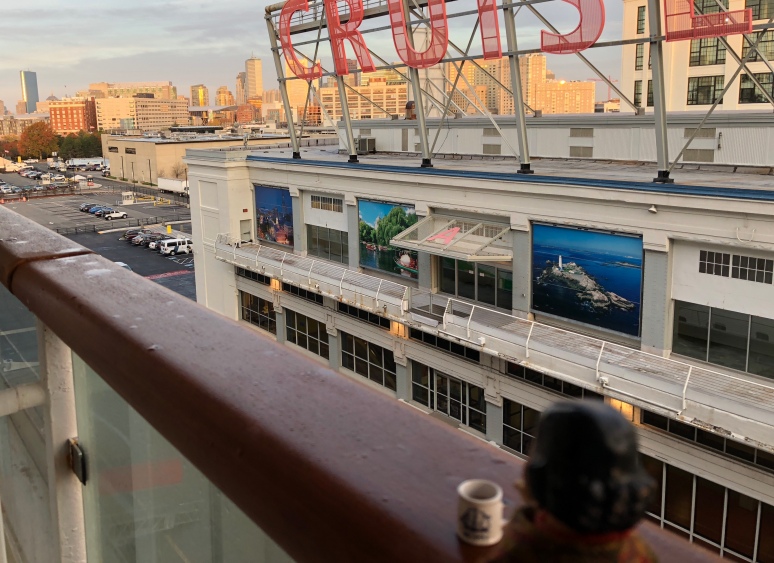 The Hittys are safely home with wonderful memories of their trip – and looking forward to their next adventure!  Oh, my, but Hittys do love Adventure!

Scaring Up Some Fun! (On Halloween)

The fun thing about cruising during a holiday is that the cruise staff goes all-out to celebrate!  Hitty Sparrow and Hitty Elizabeth equally enjoyed and feared the Jack O’Lanterns displayed at the buffet: 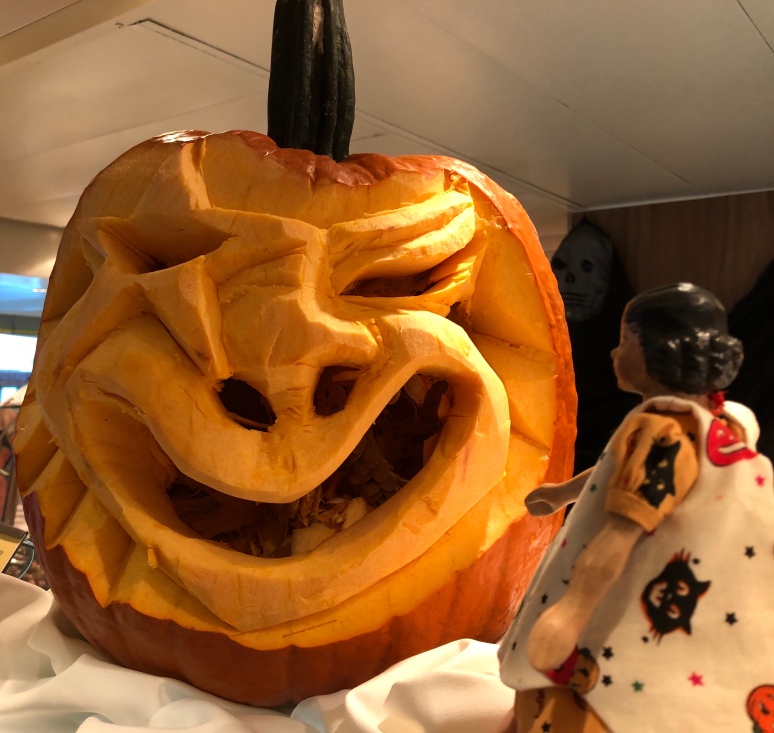 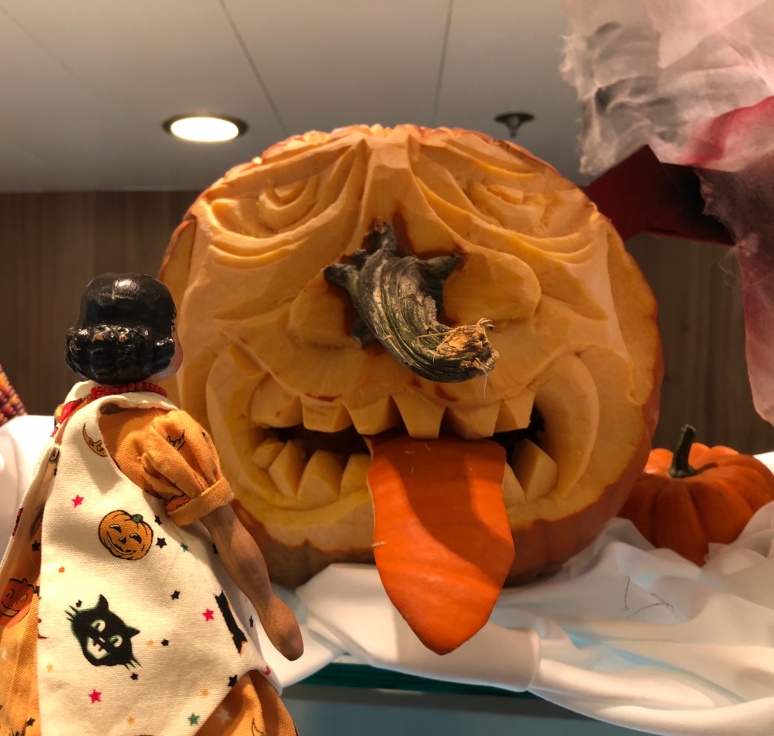 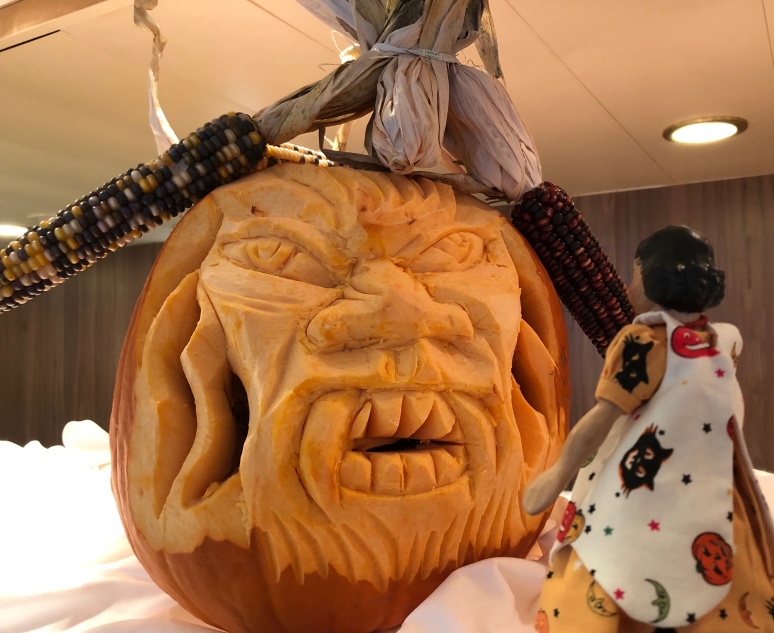 There was a display table that the chefs were especially proud of – it took them all day to create!  Again….the Hittys were not sure – should they be captivated – or spooked!? 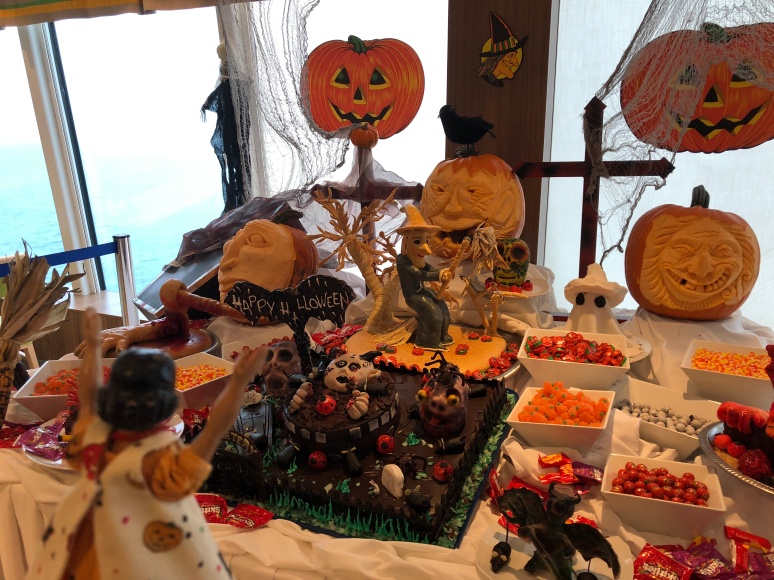 One thing was for certain….the Halloween tea time treats were scary – and delicious!

All Things British in Bermuda!

Can you see what was going up while Hitty Sparrow was in Bermuda?!  Christmas Decorations!!!  Yippee!!!

Bermuda is an Overseas British Territory…they drive on the left…they have British accents…and many shops specialize in British imports:

Did you see Hitty Elizabeth and Hitty Sparrow up there…they are standing on the old cobblestones feeling rather quaint…
The mailboxes are just like those you would find in England: 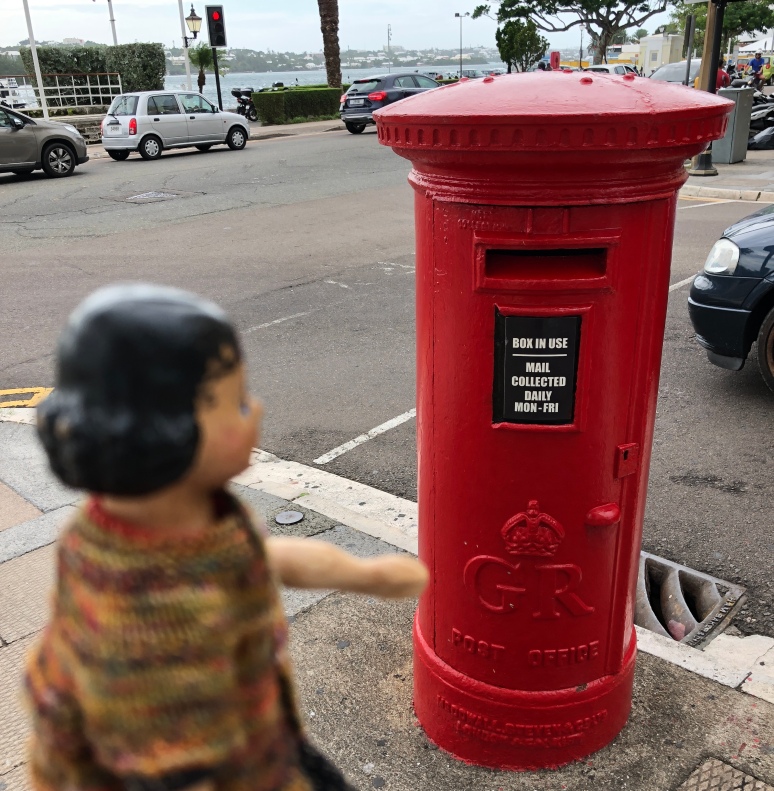 The Hittys were THRILLED to shop at Marks & Spencer, a favorite British shop:

Hitty Elizabeth thought Great Aunt Doll might get a kick out of these “On the Go” wine glasses.  Unfortunately for Aunt Doll, the Hittys are too young to buy wine:

Lunch was enjoyed on a balcony overlooking Hamilton and the water: 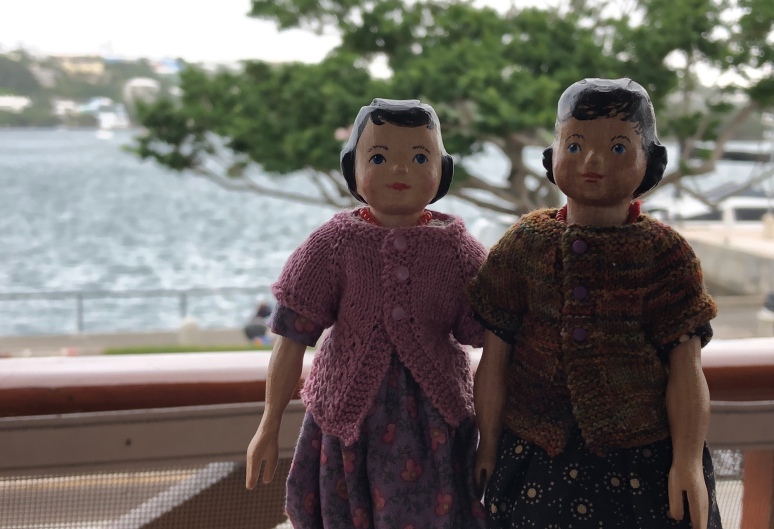 Such a beautiful view, enjoyed daily by Bermudians:

The Hittys were told that special British rotisserie chickens are flown in weekly on British Airways!!!
Hitty Sparrow had fun picking out all her favorite British goods, and played show and tell when she got back to the ship…what fun!

Things took a turn towards *Scary* though….because the Hittys were at sea on Halloween!!!  That’s a story for another day…

Where on Earth *WAS* Hitty Sparrow?

The Hittys made it to their destination!  Oh, my…that water!  Hitty Sparrow is always amazed at the size of the ship: 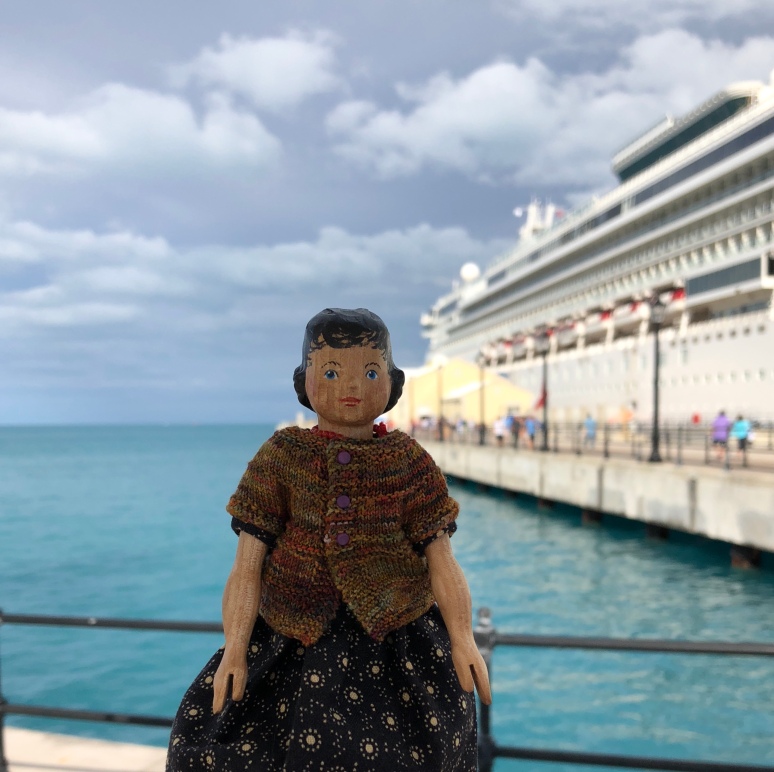 And here is the view the other way:

Here are some Wild Chickens….In fact, Hitty Sparrow though this Momma Hen and her babies were quite possibly the prettiest she had ever seen.  Their cuteness factor was likely helped by the fact that they were not shy: 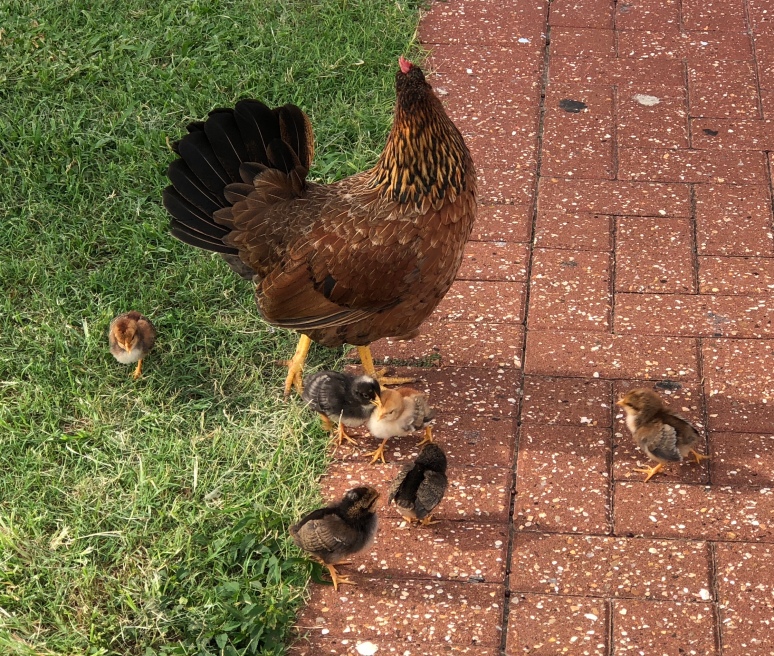 What fun to pick out just the right souvenirs for family…Some had made special requests, others wanted to be surprised…All good!

If only they could have brought home one of those precious chicks!

PS-We hope you have some time to visit our Hitty Shop on Etsy!

Sailing Away on the Ocean Blue! 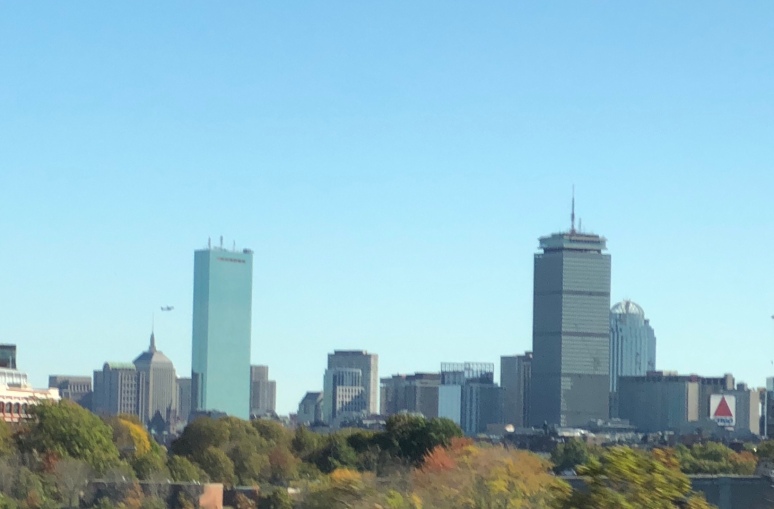 It was a beautiful day to drive into Boston!  Also an exciting day because Hitty Sparrow and her friend, Hitty Elizabeth, were going on a cruise!!!

Once settled in their state room, Hitty Sparrow greatly enjoyed watching all the loading and unloading going on waaaaay down below:

Even more enjoyable was sitting on the deck chairs the following morning, watching the ocean.  Hitty Sparrow wanted to know how far away the horizon is….Hitty Elizabeth did not know.  The sky was ever-changing:

Lunch was enjoyed in the dining room on the first day at sea:

Hitty Elizabeth even made a new friend!  HELLO, Emelinda!  Emelinda is one of the nicest Maître d’s you could ever meet.  She hails all the way from the Philippines: 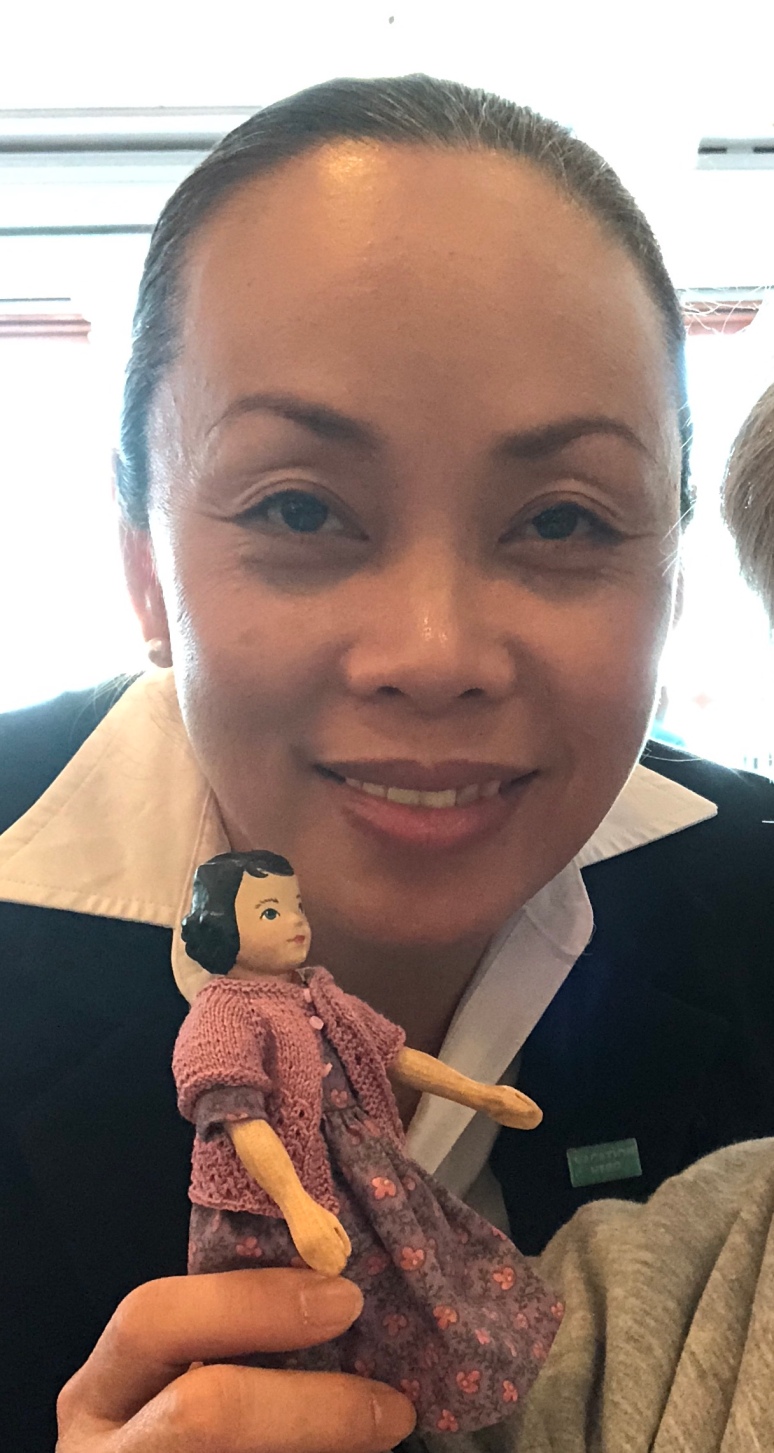 Sunset at sea – it just kept getting prettier: 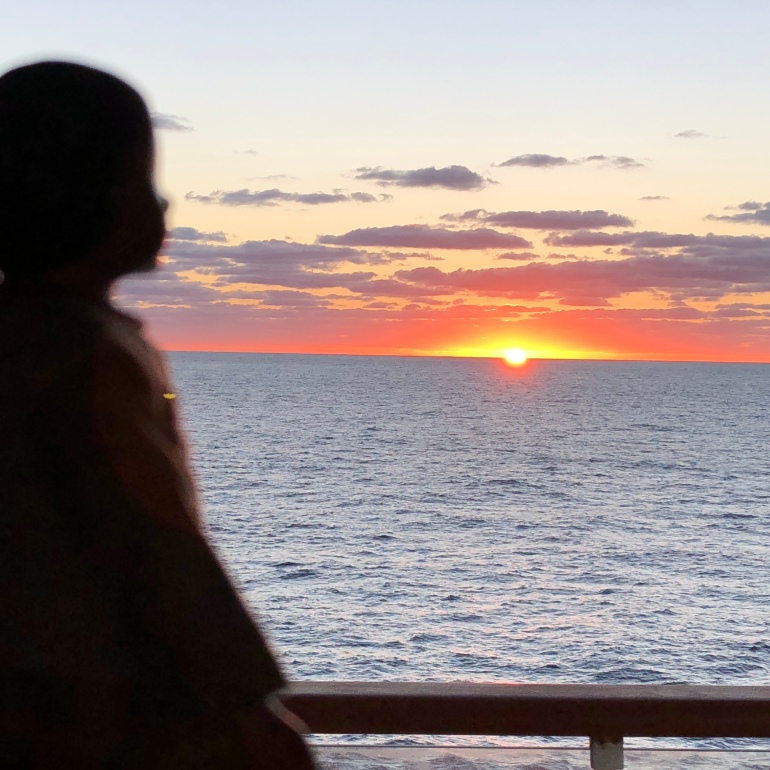 What fun to Sail the Ocean Blue….
Where on Earth did Hitty Sparrow and Hitty Elizabeth go?
And how far away is the horizon!?!

Hitty Jean is unable to travel – So Hitty Sparrow quickly dressed in the travel attire that had been put aside for her.  No worries….Hitty Jean is a pleasant Hitty and there are no bad feelings whatsoever.  Hitty Sparrow will leave tomorrow for *Parts Unknown* and quite possibly will be without internet for the next week.

A Hitty Shop update is planned for Monday, November 6th!